The Mythical Oranmiyan Staff of the Yoruba Culture

A quick highlight of Yoruba tradition will give you a drive to visit the amazing country called Nigeria. A place filled with interesting stories about their history which even the youngest child can tell because they have been told stories of the past by their fathers.

The staff of Oranmiyan is something you will want to see without being forced as the story behind the staff is exonerating. Lies in the ancient city of Ile-Ife, Osun State in the South- Western region of the country, the staff has attracted a lot of inquisit tourists. 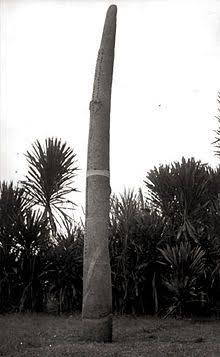 HISTORY OF THE STAFF

Oranmiyan Omoluabi Odede was a Great Prince of Ife, King of the Yoruba people. Also known as Ọranyan, he was the youngest child who then became the prime heir of Oduduwa upon his return to claim his grandfather’s throne.
Oranmiyan was said to be a giant who was also a warrior. He rescued the people of Ile-Ife everytime there is an inter-tribal wars. He left them and told them the he will always be with them whenever they call.
So when the hour of need arrived, the people of Ife did what he had told them and Oranmiyan came storming towards Ife, destroying everything on his way.
When he arrived Ife to rescue his people, he unleashed so much power that one of the warriors he killed was his friend. Having discovered he killed his friend, hewas filled with fury and he plunged his staff (another fable says it was his sword) into the ground where it immediately turned to stone and became a monolith.He ran into the forest on a horse and never came back or was seen again.
After he left, Oranmiyan became a diety to the Yoruba people and the of Ile-Ife.

Oranmiyan Staff, which is traditionally called “Opa Oranyan”, is an erected long staff located along Ondo-Ife Road, Mopa, Arubidi, Ife, Osun State and it represents the cradle of the Yoruba race. It is a slim carved granite column that is almost six metres tall (more precisely, 5.5 metres). So that makes it quite tall in comparison with the average human height.
oranmiyan used the staff as a walking stick and a symbol of his royalty when he was in existence.

The Beauty and Magic of Olumo Rock, One of Nigeria’s Foremost TouristpreviousThe Glamourous View Of the Erin Ijesha Waterfallnext